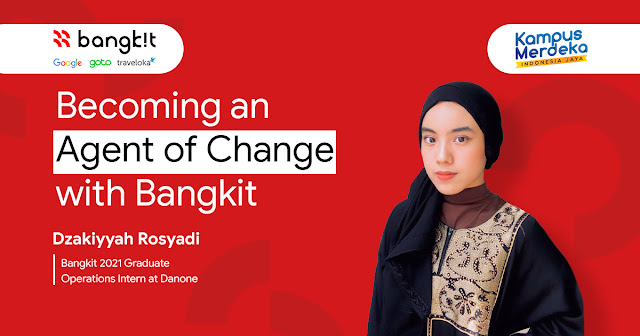 A story of Bangkit 2021 graduate with distinction from a non-IT major
Almost 4 of 10 Bangkit 2021 cohorts came from non-IT programs. Dzakiyyah Rosyadi (22), a Management Student from Universitas Brawijaya, was one of them and later achieved “graduate with distinction” at the end of Bangkit. Wow, how’s the story? It all started with her desire to broaden her learning scope, and she managed to expand her horizon.

Encouraged by a K-Drama

At that time, Kia―as she was called―had just resigned from the student executive council in her faculty. Since Kia had more free time, she thought about seeking an opportunity to learn something new. At the same time, Kia also finished watching one of her favorite Korean dramas, “Start-Up.”
Starring Nam Joo-hyuk, Bae Suzy, and Kim Seon-ho, this drama presents the story of young people who want to build a startup from scratch. The exciting storyline of the Start-Up inspired Kia to expand the scope of learning to the realm of IT. For that reason, Kia registered in Bangkit and chose Machine Learning.

“Becoming an IT developer wasn’t my main reason for joining Bangkit. I saw that Machine Learning can be incorporated into business aspects with good prospects. As a Management Student, if I get another chance, I want to learn more about business aspects that are still related to machine learning.”

Two weeks before signing up for Bangkit, Kia prepared herself. She invested her time into practicing mathematics and computer science and joining free courses on YouTuban e, an online learning platform, and 6-7 hours of free MIT courses. Kia’s efforts paid off as she was accepted into Bangkit.

Challenging at First, Get Used After

When Kia became a Bangkit cohort, she saw that the tech material presented by Bangkit was compact. She felt that choosing Machine Learning as her learning path was the right thing to do. As a person who doesn’t have an IT background, Kia was more comfortable getting familiar with coding and algorithms first.

It was challenging for Kia to have busy study hours. She studied from 5 a.m till 1 a.m and had to complete all available courses on time. It didn’t stop right there. Kia also should deepen her ongoing material before moving on to the next period. Therefore, the focus was essential to undergo every class in Bangkit. 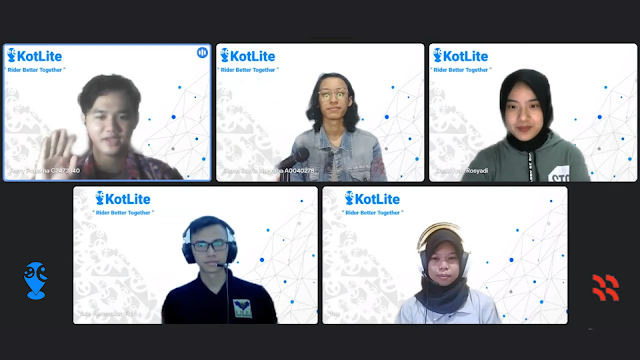 To make sure she went at the same pace as her friends from an IT background, Kia consulted a lot with her peers. The longer it took, the more Kia could catch up with the tech material she had to learn. In addition, she was also getting used to the learning pace in Bangkit. Kia realized that if someone found the most suitable way to learn or carry out any responsibilities, they would have no difficulty doing it.

The exciting part that Kia experienced in Bangkit was working on her capstone project. At this stage, Kia learned to build applications from scratch and was taught to show investors that her under-development app deserves the potential to become a business. Kia was also entrusted to be the manager of her team. With her team, she created an application that raised the mobility and smart city issue, named “Kotlite.” This application empowered and streamlined the number of public transportation circulating in an area. As a result, Kia managed to get her team into the top 50 capstone projects. 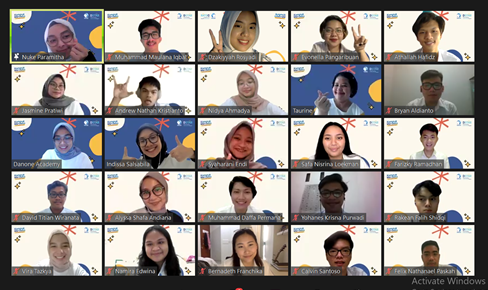 Talking about Bangkit’s impact on Kia’s life, she said that two aspects of her life were affected by Bangkit. The first is the IT aspect. As one of 3.000 selected students from all over Indonesia in Bangkit, Kia acquired IT skills and got an opportunity to train herself for certification. Her study partners, who came from an IT background, were also helpful and made Kia understand the courses easily. The tech materials provided for Kia were also available from beginner to expert level.

The second aspect is career development. Because all Bangkit learning paths were equipped with soft skills and English, Kia got lessons about career preparation. She was trained to create a good resume and have a job interview. Kia feels that her current achievements in kick-starting her career prep as an intern are because of Bangkit. This Google educational program also taught her a lot about teamwork and led her to broader professional connections. 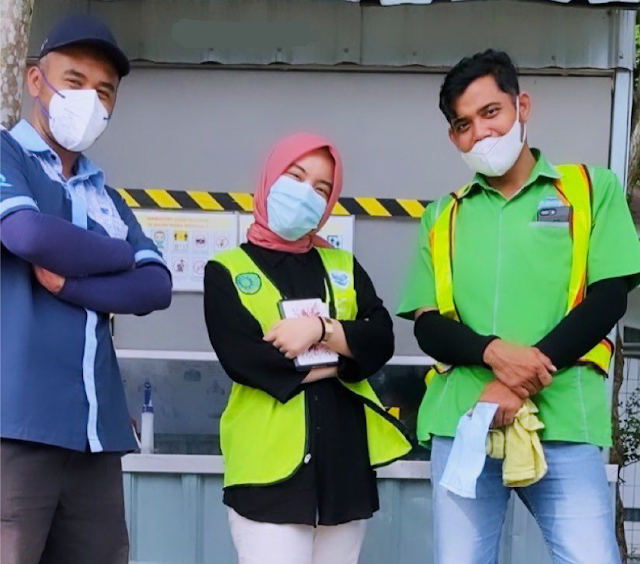 After graduating from Bangkit, Kia was seen as a young professional with talents and abilities to be reckoned with. Later, she became Co-Founder and Director of Consulting at 180 Degrees Consulting, an internationally recognized organization that focuses on pro bono projects in offering consulting services at affordable prices for small and medium enterprises in Malang.

Apart from playing an important role in 180 Degrees Consulting, Kia also enriched her work experience by applying for an internship at Zenius. She was successfully accepted because she implemented the career development lessons from Bangkit. After Zenius, Kia tried another shot by applying for the position of Operation Intern at Danone. Once again, she was accepted as part of this multinational company.

Kia's activities as an intern are pretty busy. However, she had gotten used to being like this in Bangkit because of the time management lessons she learned. She also said that Bangkit taught her to have a very productive day by utilizing the Google Calendar in her activities. 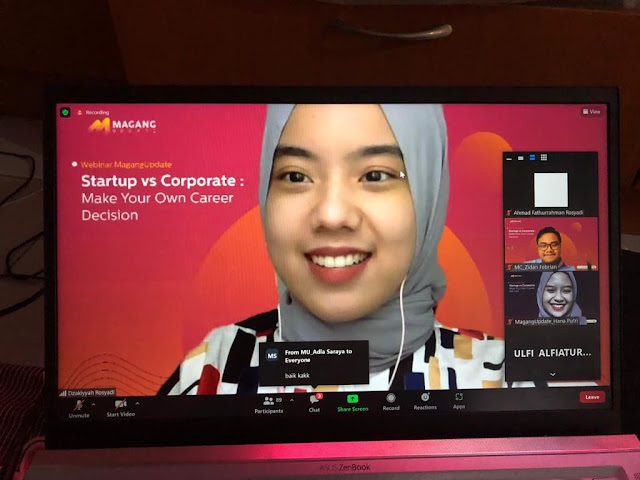 Something that makes Kia stand out from other Bangkit alumni is her interest in communication and personal branding. She said that she also learned about personal branding in Bangkit through a session from Google named “You Are Remarkable.” In this session, Kia understood that personal branding isn’t related to bragging or being arrogant. It encourages us to present the facts that we have experienced. 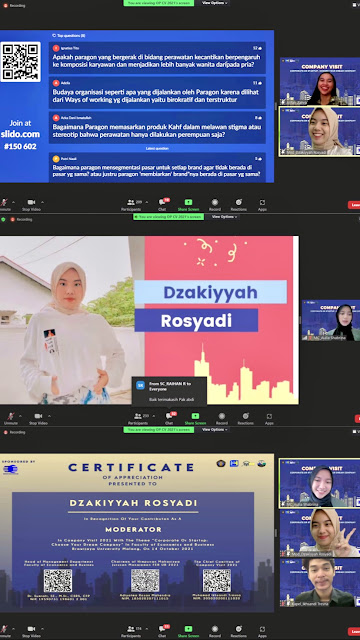 Kia admits that before Bangkit, she was insecure about herself for having nothing to show. But Bangkit helped her find something in her that she could appreciate and show the world. Kia said that by practicing personal branding, we can tell people that we are capable of doing something and are open to any kind of opportunity offered. In addition, in the private branding session, Kia also learned about writing copy for her own post and public speaking.
On her social media and YouTube channel, Kia actively promotes Bangkit and shares her experience undergoing 900 hours of study in this program. Kia’s personal branding activities made her often invited to be a speaker at various webinars about Bangkit or personal development.
“Strive to be Happy and Live to Believe”

When Kia was asked about her value, she talked about her favorite song from Jessie J - Stand Up. She said that this song inspires her and becomes her guide in living her life.

“I love the part ‘strive to be happy and live to believe.’ It taught me that the best thing we can do to live our life is to always believe and stop thinking about impossibility. At the beginning of Bangkit, I doubted I would survive till the end. But after living it, apparently, I could graduate with distinction, and my team became the top 50 capstone project.”

For 2022 Bangkit cohorts, Kia wants to show that Bangkit is an excellent program that can help them get lots of exposure for free. They will have more extensive relations with students from over Indonesia, mentors who are also tech experts, and leading tech companies ready to support them in kick-starting their careers. All these privileges are given to Bangkit cohorts at a very young age.

“Bangkit is a challenge to prove that we are agents of change who can elevate Indonesia’s technology for the next few years.”

Are you ready to expand your horizons in Bangkit 2022 like Kia did?
More stories about Bangkit alumni:
bangkit google machine learning