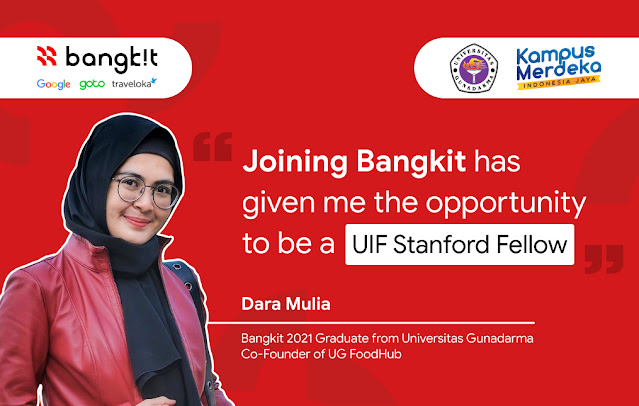 “The value of an idea lies in the using of it.”
Thomas Alva Edison, Inventor of the Light Bulb

Ideas and innovations are two of many indicators of Bangkit’s success. Therefore, producing high-caliber digital talents eager to push the frontiers is one of Bangkit’s missions. Dara Mulia (25), as a Bangkit 2021 graduate, succeeded in achieving this standard.

While participating in Bangkit, she was chosen to be a Fellow for Stanford University Innovation Fellows representing her campus, Universitas Gunadarma. Returning to Indonesia from the US, Dara and her team came up with an impactful idea for the educational institution where she studied. Let’s check how it went!

Unlocked the Most Awaited Achievement

Dara is a student from Universitas Gunadarma, majoring in IT. Becoming an entrepreneur who utilizes tech advances was part of Dara's dream. Therefore, she was excited when she saw the emergence of Bangkit, an educational program initiated by Google and well-known tech companies such as GoTo and Traveloka.
She believed that Bangkit could improve her knowledge as a prospective tech entrepreneur. Therefore, Dara did not think twice about signing herself up for Bangkit. In fact, Dara planned to join Bangkit for two consecutive years, taking the path of Cloud Computing and Machine Learning, to make herself more prepared for her goals. 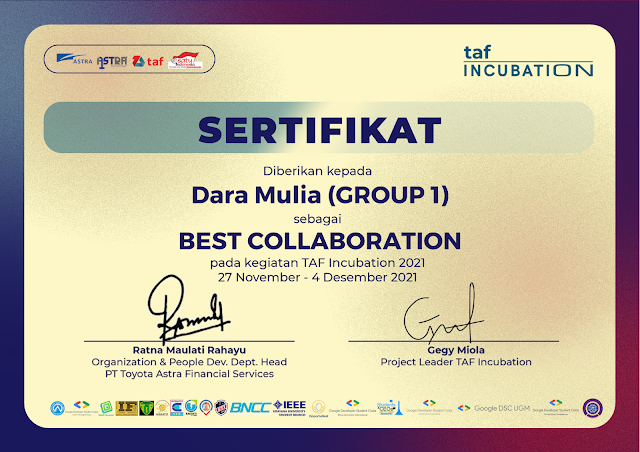 After being accepted as a cohort, Dara admitted that Bangkit broadened her horizons about tech. She just realized that tech is divided into several disciplines. In addition, Dara's soft skills training, such as how to make MVP, leadership, and communication, also impacted her. She said she managed to win a competition that she had never won before.

“I've never won a business case competition before. However, after studying in Bangkit and applying knowledge from the soft skills classes, my team and I managed to win an award as the Best Collaboration in TAF Incubation 2021 by Toyota Astra Financial.”

In that competition, Dara created an Android app that can make users experience driving a car without having to come directly to the showroom. Furthermore, Dara realized that she had never received soft skills training as comprehensive as Bangkit had taught.

The 3 Days at Stanford that Changed Dara’s Life 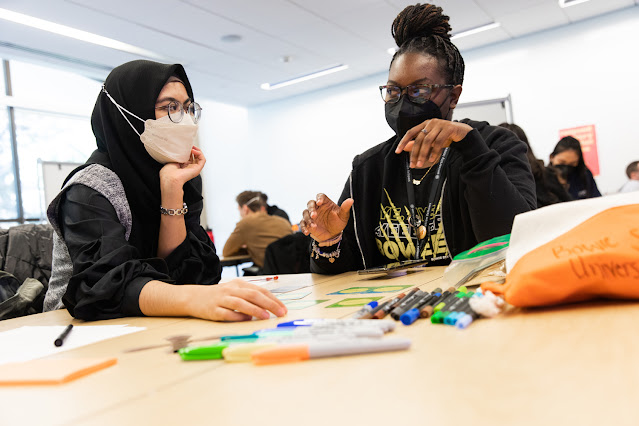 After graduating from Bangkit, Dara had the opportunity to become a Fellow in the Stanford University Innovation Fellows (SUIF) program. In collaboration with Bangkit regarding selection, SUIF is a program initiated by Stanford University to empower students to become agents of change on their campus. This program honed four main things: innovation, entrepreneurship, design thinking, and creativity.
Dara’s activity at Stanford took place on May 19-21, 2021. This year’s SUIF theme was “fight for your dream, break the limit, but don't push yourself too hard.”

“This year's SUIF theme made me not only practice improving creativity, entrepreneurship, and leadership. I was also taught to make progress without being too hard on myself. This three-day event changed my life.”

By participating in this activity, Dara realized that rushing is not always good. Instead, strolling is more beneficial because it gives us time to think and innovate. That was what Dara learned from her attendance at Stanford. 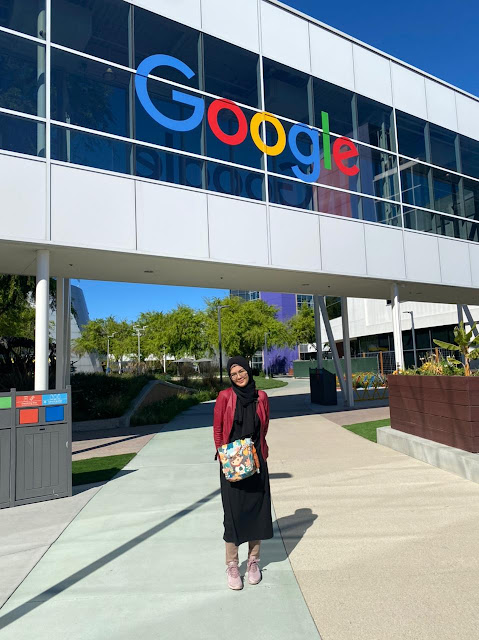 Moreover, Dara also had the opportunity to visit the Googleplex in Mountain View, California. There, she was amazed by the presence of a T-Rex fossil in the Googleplex yard. This fossil is a marker that Google shouldn’t be extinct like the T-Rex; therefore, Google needs to keep innovating to survive. 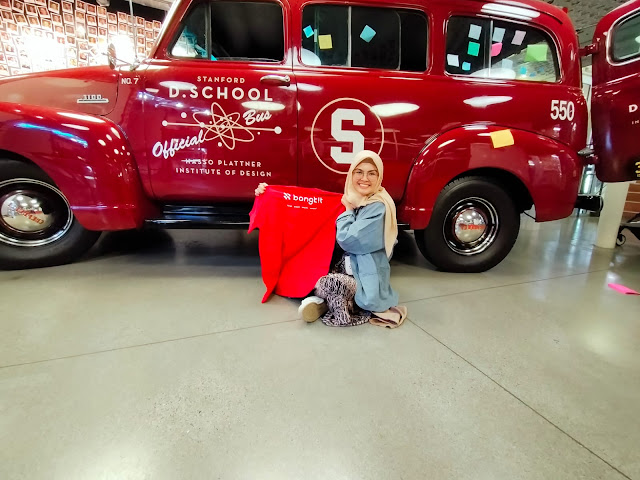 Dara came from the US, not empty-handed. She brought home an innovation that would later be a solution to her campus’ problem. Together with her team, Dara wanted to create an app called UG FoodHub. 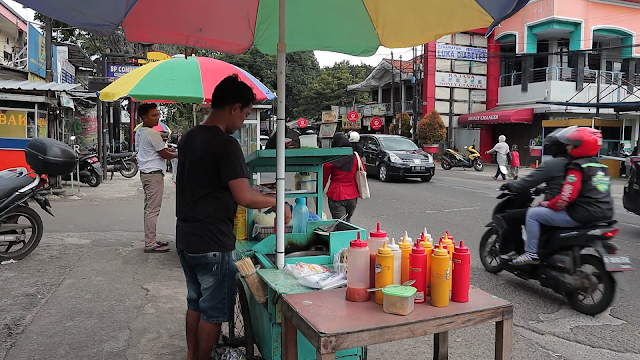 According to the Survey of Kantin Kolaborasi Digital conducted by Dara's team in November 2021, 92.4% of the academic community in Universitas Gunadarma only buy snacks nearby campus. This is because other food vendors are located far away, the shipping costs are expensive, and various other reasons. With a total of 42,809 students and academic staff spread across 14 campuses, UG FoodHub is here as a solution to this problem. It stimulates the SMEs and can be a marketplace for students who want to sell snacks on campus.
The delivery fees at UG FoodHub are very cheap. It is only Rp. 2,000 for foods in multiples of Rp. 20,000. Dara said that students could use the UG FoodHub to look for extra income. She targets UG FoodHub to complete its front-end development by the end of this year. To accelerate UG FoodHub’s performance, Dara also seeks funding for her project.

Wished to be an Entrepreneur Once, Aspires to be an Educator Now 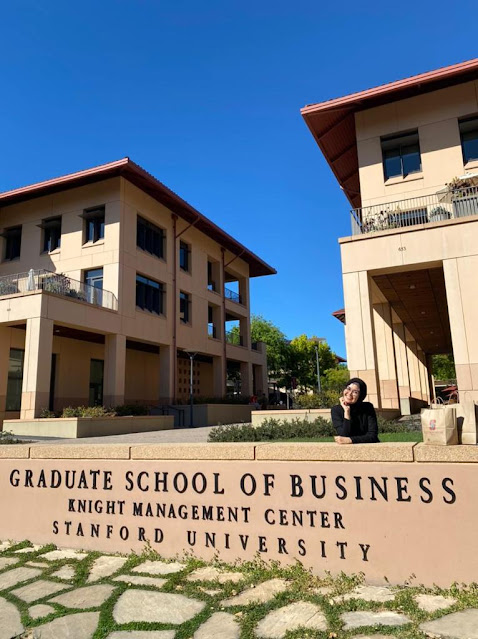 Dara's lessons from Bangkit and SUIF made her understand that gaining competency without dedication is meaningless. Therefore, after gaining insights into the importance of being impactful for others, Dara no longer dreams of being an entrepreneur.

“I aspire to be a teacher because I think education can change someone’s life. Therefore, I want to share my acquired knowledge with many Indonesian children who are not as lucky as I am. I want them to be innovative and can create solutions to problems around them.”

Hence, one of Dara's short-term plans is to dedicate her knowledge when she returns to her hometown in Kabupaten Pidie Jaya, Provinsi Aceh, later. Many children in her village don’t speak Bahasa Indonesia yet, and she wants to teach this national language to the children around her.

Adopting the spirit from Stanford, Dara wants to advise her fellow cohort in Bangkit 2022 to keep fighting for their dream, break their limits, and don't push themselves too hard.
More stories about Bangkit alumni & cohort:
bangkit google machine learning