No Dreams are Too High 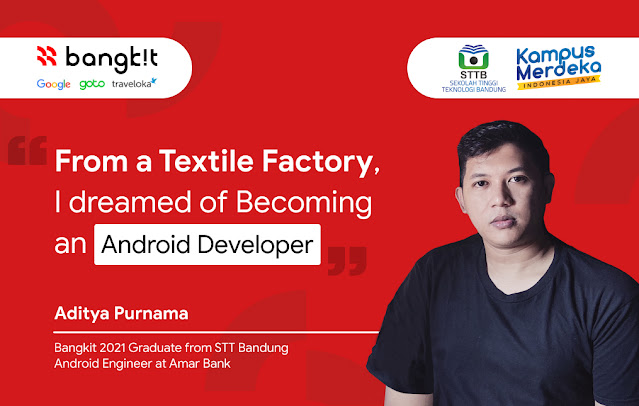 “The future belongs to those who believe in the beauty of their dreams.”
Eleanor Roosevelt, the First Lady of the United States (1933-1945)

Every person has a way of pursuing their dream. Some have smooth and windless roads, while others must deal with steep roads. For Aditya Purnama (27), the second path fits the twists and turns of his struggle.

Aditya started his career as a laborer in a textile factory in Kabupaten Bandung. While in charge of redrawing patterns on cloth for so long, Aditya harbored a desire to provide a decent living for his family. Moreover, he knew he carried a huge responsibility as the eldest son.

Quit College, Then Worked as a Textile Laborer

Aditya is the eldest of three children. His first sibling had just graduated from high school, while the youngest was still in middle school. Aditya’s father worked as security at a textile factory named PT Kahatex in Kabupaten Bandung. Her mother once worked as a laborer in the same factory but then decided to leave and become a housewife.

Aditya’s father wanted the best education for his children. Therefore, he paid for the tuition fee of his children, including Aditya, who studied at the English Department, STBA, at that time. But unfortunately, Aditya didn’t put his heart into this field. Feeling that it wasn’t his passion, Aditya chose to quit college.

The limited income that Aditya’s parents earned made Aditya unable to change study programs or campuses according to his wishes easily. He had to try on his own by working and saving money to return to college. At that time, the job opportunity that Aditya could get with his high school diploma was to become a textile worker in the factory where his parents worked.

“In the textile factory, I worked as a Tracer Designer, who had to redraw patterns so they could be applied to the cloth.”

Working from morning to night, Aditya earned a mediocre income equivalent to UMR for his family’s monthly needs. He often mumbled, “Will my future always be like this?” He felt he could do more for his family’s brighter future. Aditya’s search for life’s purpose lasted for some time, so he was determined to change.

Wanted to Deepen Android Because of the Promising Future

Aditya’s parents set high hopes for Aditya to guide his younger siblings toward a brighter future. His parents encouraged Aditya to find his true dream. Aditya’s search ended when he saw an Android programming video on YouTube. Having zero knowledge about Android, Aditya tried to finish watching the video even though he didn’t understand it.

However, there was one thing that Aditya caught from the video he watched. He realized that the smartphone is the most accessible device for everyone. If he explored this technology field, he thought about becoming someone highly sought after by companies. So, to learn more about Android closely, Aditya decided to buy a book on basic Android programming.

Having no tech background made Aditya unable to understand the contents of the book he had just purchased. This prompted Aditya to study in Sekolah Tinggi Teknologi Bandung (STT Bandung), majoring in IT. He hoped that by formally studying technology, he could have a reasonably firm foundation in IT.

Going back to college costs money. For this reason, Aditya continued to work as a textile laborer until his savings were sufficient. Finally, after 2,5 years working in a factory, he decided to leave to focus on his studies at the campus of his choice. Armed with his meager savings, Aditya hoped he could find a new job while pursuing his bachelor’s degree.

Borrowed His Friend’s Laptop to Study 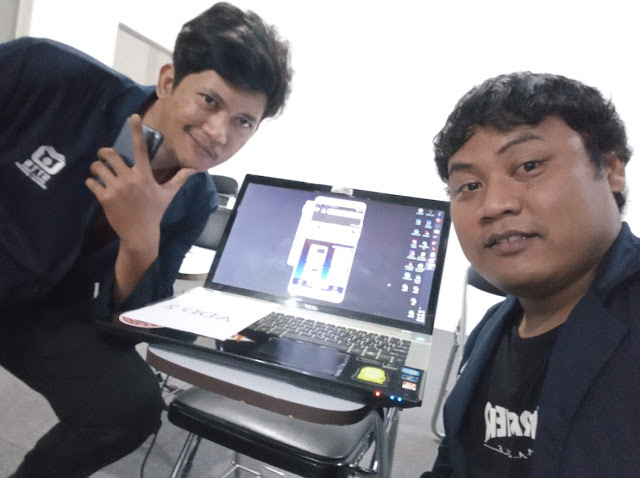 Aditya began a new chapter in his life as an IT student. He used the money he saved from his work as a laborer to assemble a computer with minimal specifications and pay for his daily needs for college.

As time went by, Aditya found new difficulties. He never got a job that he could pursue while studying. As a result, his savings didn’t increase, and he was worried about being unable to fulfill his daily needs in the following semester. Then, unfortunately, he had to sell the computer he had just assembled.

“Having no more computers pushed me to borrow my friend’s device for studying. I felt grateful for having good friends who let me take the laptop home.”

As the 3rd semester began, Aditya’s savings were running low. To increase his income, he used the money from selling his computer to start a small business selling shoes. Unfortunately, the business didn’t run smoothly. Aditya was losing money, and his capital was gone. In addition, he was confused about fulfilling his daily needs for college in the 4th semester.

Bangkit: A Gate to Change His Life 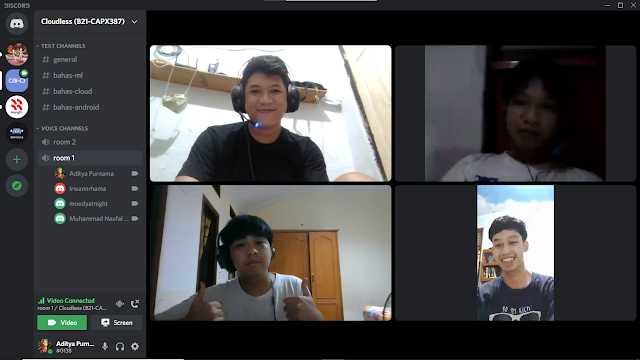 In the 4th semester, Aditya got to know about Dicoding through Instagram. Seeing Dicoding as the best learning platform to hone his tech skill, Aditya decided to participate in one of Dicoding’s scholarship programs. He managed to be accepted into that program, then followed the learning process by still using his friend’s laptop.

“The knowledge I gained was only up to the fundamental level. Therefore, I decided to save more money so that one day I could join the Dicoding paid class because I want to acquire Android skills up to the advanced level. Moreover, I was looking for extra income by helping my friends’ project.”

Aditya’s saving was not enough. It made him look for another free learning opportunity. At the end of 2020, Dicoding announced the opening of registration for the Bangkit program initiated by Google and well-known industries such as GoTo and Traveloka. Seeing that Bangkit provided scholarships for learning Android up to the advanced level in Dicoding for free, Aditya wanted to participate. The presence of instructors who are experts in their fields also encouraged Aditya to sign himself up.

Wanting her son to study to the fullest in Bangkit, Aditya’s mother even sought a loan to buy a laptop with enough capacity for Aditya. That was because the essential thing for Aditya’s mother was the success of her son studying at Bangkit so that he could have a better future.

Graduated from Bangkit with Distinction and Got a Job Opportunity 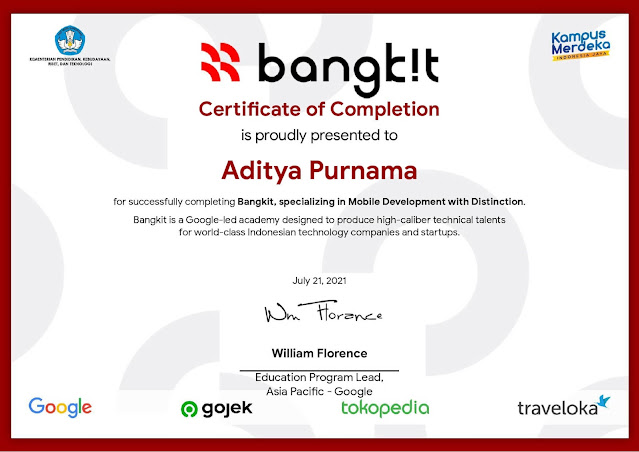 Aditya’s mother’s struggle and prayers from his family brought blessings to Aditya, who was persistent in his efforts. After spending more than 900 hours on the Mobile Development (Android) path, Aditya graduated with distinction. He is among the best 10% of last year’s Bangkit graduates. This achievement was obtained because he was committed to participating in the program and didn’t want to waste his parents’ efforts. But it didn’t stop there. Aditya’s academic achievement also earned him a scholarship from the campus, so he didn’t have to pay tuition fees in semesters 7 and 8.
After obtaining a learning certificate from Bangkit, Aditya uploaded it to LinkedIn immediately. This made him contacted by a recruiter from a private bank in Jakarta after graduating from STT Bandung. He was asked to apply for the position of Android Engineer at Amar Bank. Since becoming an Android developer was one of his goals, Aditya accepted the offer.

"When I took the job selection test, I felt that I couldn't possibly be accepted at the bank if I was only self-taught and didn't study in Bangkit and Dicoding."

But Aditya succeeded in achieving the position of Android Engineer at Amar Bank based in Jakarta. Now he manages and develops the features in Amar Bank’s mobile banking application, Senyumku.

He feels that his gaining of Bangkit and Dicoding is very useful for carrying out the tasks he must complete as an Android developer. Aditya admitted that he had pretty solid fundamental knowledge. In addition, the soft skills training he received also helped him communicate and work with the team.

“No Dreams are Too High”

Aditya’s job now allows him to ease the burden on his parents in paying for the family’s needs. In addition, he can also help his mother repay the loan she used to buy the laptop.

Successfully becoming an Android developer makes Aditya have even higher aspirations. He wants to have a career as a Mobile Engineer in an overseas tech company one day. Therefore, while honing his tech skills, Aditya is strengthening his English.

Even though the road he had taken was very winding, Aditya remained strong in every process of his life because he always focused on the goals he wanted to achieve. For him, no matter how complex the challenges were, his dreams and his parents’ sacrifices always strengthened him.

"No dreams are too high if we work hard to make them happen. My struggle started with borrowing a laptop and wearing a factory labor uniform. I’ll never forget that.”