“Strike your weakest point to turn your dream into a reality”

December 27, 2022
A Story of Andi Abdul Salam Sabil, Bangkit 2022 Graduate from Informatics, Politeknik Elektronika Negeri Surabaya
“The biggest adventure you can take is to live the life of your dreams.”
(Oprah Winfrey, American Talk Show Host)
Becoming a tech talent wasn’t just the dream of Andi Abdul Salam Sabil (22). Specifically, Salam’s interest in tinkering with networks made him wish to be a DevOps Engineer. To turn his goals into reality, Salam vigorously equipped himself with the required tech competency since he was in high school. Then, he went further by participating in Bangkit. As a result, Salam’s persistence in living the life of his dreams led him to accomplish his goals.

Since he was a teenager, Salam, who resided in Makassar, had always aspired to launch a career in DevOps. Therefore, he decided to attend a vocational school, majoring in Computer Network Engineering. After graduating, to pursue his dream, Salam migrated to Surabaya to study at the Politeknik Elektronika Negeri Surabaya (PENS), majoring in Informatics.

At PENS, Salam told his friend that working in the field of DevOps has always been his dream. Knowing it, one of Salam’s comrades recommended he join Bangkit.

“My friend said I can learn more about network engineering in Bangkit, specifically in the Cloud Computing path. So, to get myself ready for a job in the DevOps field, I signed up for Bangkit.”

After undergoing a series of admission tests, Salam was accepted as the Cloud Computing Cohort in Bangkit 2022. However, as a vocational student with many activities, he felt that the learning schedule in Bangkit was challenging. Salam alternately had to focus on learning in Bangkit, studying on campus, and working on his thesis. That made him regret and think about why he didn’t join Bangkit earlier.

Another challenge that Salam faced in Bangkit wasn’t only about the tight schedules that required him to apply his time management skills from Bangkit. Salam also had to bear with the English-speaking environment in the program. However, he didn’t see it as a test.

“As a tech kid, I have weaknesses in soft skills and English. Luckily Bangkit drilled me with these materials, which greatly improved upon my shortcomings. I believe that striking my weakest point will help me turn my dream into a reality.”

Salam admitted that his self-esteem improved after gaining insights into soft skills and English. Thus, he became more confident in communicating in a foreign language. Then, the tech skills he acquired from Bangkit helped him achieve Associate Cloud Engineer (ACE) certification.

Becoming a certified ACE accentuated Salam’s qualifications as prospective tech talent. As a result, he said many recruiters approached him through LinkedIn to ask him to apply for specific job vacancies in several companies.

When Salam Turned His Dream Into Reality 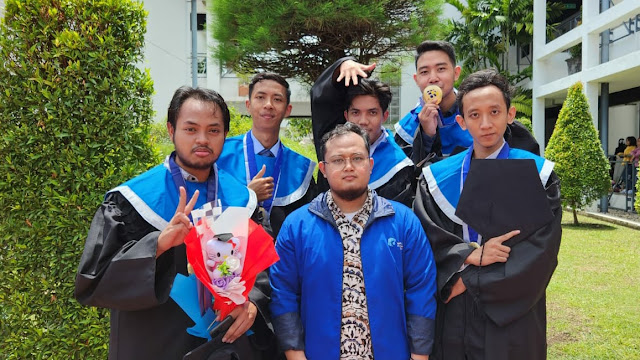 With Bangkit’s graduation and ACE certificate in his hand, Salam applied for various positions in the DevOps field. One of the companies he was attracted to was StickEarn, a Jakarta-based advertising technology company. After the selection process, Salam was finally accepted as a Full-Time Junior DevOps Engineer.

"In the office, I'm in charge of giving a good experience for developers to deploy their applications to users and optimizing servers to prevent cost overruns. I didn’t need much effort to understand my role because Bangkit has equipped me with sufficient tech knowledge.”

Salam’s success in turning his dreams into reality made him want to encourage Bangkit 2023 prospective cohorts to be confident in stepping out of their comfort zone. He believed that result would always uphold its process.
More stories about Bangkit alumni & cohort:
bangkit cloud computing google