Embrace the Opportunity Ahead 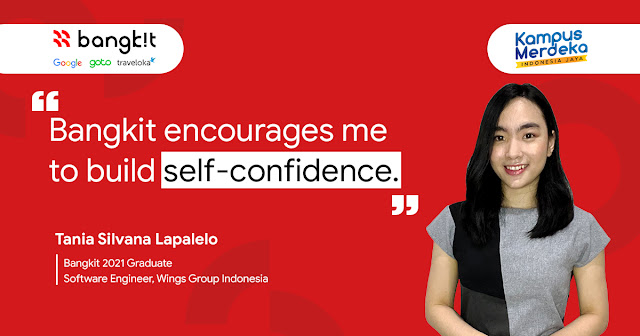 “As many as 64 percent of Indonesian women say they are still hesitant to pursue their dreams.”

(A Survey by PT Unilever Indonesia, 2019)
The survey results above are inversely proportional to the willpower of a young woman from Ambon who graduated from Bangkit 2021, Tania Silvana Lapalelo (23). Accompanied only by herself, Tania is willing to be almost 2,000 kilometers away from home to pursue higher education at Universitas Surabaya. She did all these things because Tania is a tough woman who is ready to embrace any given opportunity that lies ahead.

A Clueless Girl who Wants to be a Cool Woman

“I thought IT was just about word and data processing software.”

That was what Tania thought about when she heard of “IT.” Born and raised in Ambon with limited access to more profound knowledge about technology, Tania assumed that studying IT would make her only deal with word or data processing software as she learned in high school before. Turns out, IT is more than what stays inside Tania’s mind.

Tania’s reason for taking an IT major in college was quite simple. She saw that working as an IT expert is impressive, especially if someone involved in that field is a woman. Yes, Tania wanted to be that “cool woman” who’s skilled in IT.

Apparently, being the incredible woman Tania always wanted wasn’t relatively easy. There were lots on Tania’s plate. Tania had to start running and learning many things while Tania was still utterly blind to IT. She also felt inferior to her friends who had attended a vocational high school in computer and network engineering. But that didn’t stop her from trying to conquer the challenge.

The first thing Tania did to manage to climb the ladder to success was spotting her own weakness. She analyzed in which part she felt that she was lacking. Once she knew her shortcomings, Tania did many things to patch her flaw.

When she realized she wasn’t that good at a particular subject, she wasn't ashamed of asking her friends for help. Tania would schedule lunch with her friends, then study learning materials she didn't understand. Even she didn’t hesitate to approach her lecturer, who had just finished carrying out her thesis defense, to ask about subjects she didn’t understand.

Finally, Tania’s persistence in learning made her successful in reaching outstanding achievements. She earned a GPA of 3.88 out of 4.00, a remarkable outcome for someone initially clueless about her course.

The opportunities that Tania conquered weren’t only about her academic achievement on campus. She also challenged herself to excel in other fields. Knowing that most industries want a talent who can speak more than one foreign language, Tania was determined to learn a new language other than English.

She chose to learn Chinese, and her perseverance in learning managed her to participate in a student exchange to China. Tania grabbed the opportunity to become an ambassador for her university, Universitas Surabaya, and Indonesia in Sias University, Zhengzhou, China. Her GPA after one semester of studying at Sias University was 3.98 out of 4.00.

Bangkit Helps Her to Step Up

Tania saw Bangkit as the main course on her plate. She was waiting for this program to prove that she could overcome more significant challenges. Some lots captivated Tania to sign herself up for Bangkit. The first was the involvement of prestigious technology industries such as Google, GoTo, and Traveloka. She couldn’t wait to hone her skill right from the expert.

The second was an opportunity to build a network with students from over Indonesia and incubation funds offered for the best 15 capstone projects. It spurred Tania to be even more enthusiastic to develop herself in Bangkit.

The last one was the three learning paths offered. Tania couldn’t be more excited about seeing Cloud Computing as one of the provided learning paths. Beforehand, Tania took a Cloud Computing course on Coursera and was interested in deepening this skill in Bangkit. Tania’s favorite part in Bangkit was self-studying with weighty material.

“I was always excited to participate in guest speaker sessions with inspiring figures. It motivated me to keep learning and doing my best. The skills I got from Bangkit also built my self-confidence and made me more insightful. It pleased me a lot to learn something new in Bangkit.”

Towards the end of Bangkit, Tania and her team created a mental health application named FIN. This app was built to support people with mental health problems by providing a platform to help each other. Fellow survivors can also share their experiences on this application. The success of Tania and her team in doing this capstone project was another challenge that Tania had overcome.

Ready for Another New Opportunity

After completing her studies at Bangkit, Tania didn’t waste another opportunity offered by this program. She participated in Bangkit Career Fair, a company enthralled by Tania’s learning performance and academic achievements. This career fair paved the way for Tania to be hired as Software Engineer at Wings Group.

Tania admits that Bangkit has polished her to become a high-caliber digital talent. The learnings and skills she acquired from Bangkit help in her current career, particularly in the realm of communication and knowledge about information technology. Bangkit also seems exceptional in Tania’s eyes for giving her many insights about how to build a startup by delivering material about creating a business plan.

Many things were gained by Tania as she graduated from Bangkit. She wants to encourage students from all over Indonesia to put their efforts into the learning process in this program. In her opinion, all programs offered by the Ministry of Education, Culture, Research, and Technology are also outstanding, and Bangkit is the most excellent one.

“Supported by reputable industries, I see Bangkit as a program with weighty material that can hone our technical, soft, and English skills. These three things are something we can’t necessarily get optimally and completely on campus. So, be persistent in learning in Bangkit and be clever in looking for opportunities.”

Tania is ready to conquer ‘the new waves' she's about to face after kick-starting her career smoothly.
More stories about Bangkit alumni:
bangkit cloud computing google