With Soft Skills, You Can Stand Out from the Crowd 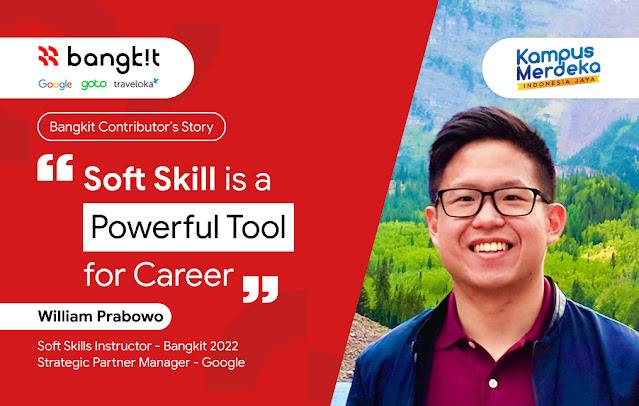 “As much as 77% of employers believe that soft skills are as important as hard skills."
(Skill Survey, 2021)

When he had just finished his undergraduate studies, William Prabowo (29) personally experienced how soft critical skills are. As a graduate of chemical engineering, William knew that soft skills played an important role in him to kick start a career in the tech industry.

Had only William relied on hard skills, a chemical engineer like him would have definitely had difficulty in launching his career at Google. However, William understood that soft skills are as necessary, if not more important, than hard skills in his career. Therefore, by maintaining close relationships with his networks, he got referred, interviewed, and accepted to contribute to Google in the San Francisco Bay Area, USA.

Now that William had started his new position as Strategic Partner Manager at Google Indonesia, he wanted to give back. He loves spreading information to Indonesian students that their competence is not only assessed in terms of technical skills but also soft skills. Therefore, William decided to contribute to Bangkit as a Soft Skills Instructor.

Soft Skill is a Powerful Tool

William is a Chemical Engineering graduate from the University of California, Berkeley, USA. As mentioned above, William's social networks led him to kick start his career contributing to Google, even though he came from a totally different educational background. His success in taking part in a giant technology industry inspired him to contribute to Bangkit. He wanted to show the young generations of Indonesian that soft skill is a powerful tool that is super underrated by early graduates.
Since 2021, William has been part of Bangkit and serving as Soft Skills Instructor. Last year, he had an opportunity to mentor one of the Top 15 Bangkit 2021 Capstone Projects, namely ADIL. Under the mentorship of William, this group created an app that aims to organize Indonesian legal regulations to make them easily accessible for all Indonesians.
As a Bangkit contributor, William saw similarities between his former self and the cohorts he taught. As a student, William always has questions on how to prepare and navigate for a great career after graduation, such as preparing a resume & cover letter, how to network to get your dream job, and excelling at job interviews. William's career journey was not always smooth; before getting accepted, he had to send hundreds of resumes and did many interviews for other roles before coming to the position. And getting rejection letters are also not uncommon in his view during the job search days before landing his role contributing at Google.

Thus, with that experience before him, William wants to ensure that the younger generations of Indonesian tech talents can prevent and learn from the mistakes that he made, be more successful in landing their dream job after graduation, and can take on the competition with the global tech talents around the world.

Growing Awareness about the Importance of Soft Skills

In Bangkit, William grew students’ awareness about life paths, personal branding, and interview. He taught professional communications, including how to write a great resume and the often-overlooked importance of networking for landing an interview. This insight plays an essential role for cohorts because leading the students to have a promising career in the tech industry is one of Bangkit's ultimate goals.

“I shared with the Bangkit students some big ideas and resources that are easily accessible abroad but not readily available by Indonesian students. I hope that by sharing these insights, Indonesian graduates can be on a level playing field with their counterparts from abroad.”

William admitted that the smaller number of participants in this year’s ILT class made it easier for him to interact with students. He thought an interactive course could ease the cohorts to discuss with the instructor. Discussion can keep students’ curiosity alive because, according to William, interest and thirst to learn new things are the keys to becoming a tech talent.
Apart from curiosity, William also advised students to cultivate creativity. They have to get more insights from activities outside the campus because, in reality, there is a mismatch between college courses and the industry's requirements. Therefore, participating in a career readiness program like Bangkit can bridge the gap.

Shaping Students to be Globally Competitive

Knowing that many Bangkit cohorts would later pursue a career in a leading tech industry like Google, William shared information about the four criteria for Google employees. These require role-related knowledge, general cognitive abilities, leadership skills, and googleyness.

“If I were to define it, Googleyness is the quality of whether a prospective Googler is a nice person and can do the right things. For example, as Google has great people with great ideas, differences in opinions will always arise from time to time. As a prospective Googler, how would you resolve these differences? Is it with improving your arguments, constructive syncs, and empathy (what we should be doing), or else (e.g., raising your voice, which is a no-no here)?
Aside from meeting the four criteria above, a tech talent must also go through a continuous learning process because technology constantly evolves. What is learned today may not necessarily apply in the future.

As important as tech skills, according to William, a tech talent should also have a good grasp of soft skills. It came to William’s attention during his undergraduate study in the US. At that time, William was participating in an interview preparation seminar with a recruiter from one of the top tech companies in the US presenting. The recruiter mentioned eight criteria for what an employer looks for. Complex skill (relevant experience/knowledge) is only mentioned once. In contrast, to his surprise, soft skills are all of the remaining qualities employers look for (critical thinking, initiative, adaptability, resourcefulness, positivity, team player, and goal-oriented).
This shows that hard skills are only one of many things needed to launch a career in a global industry. Soft skills are not only something that distinguishes the talents but also can help them work with teams well and communicate ideas to many people effectively. Therefore, William believed that soft skills are essential things that digital talents need to have a good command of. It will open more doors in this age of fierce competition for global tech talent.

Rooting for students to be ready for a global career, William advised them to have good English skills. He recommended various ways of improving English quality.
“First, you can start by exposing yourself to more English reading materials (e.g., magazines, novels). Then to improve your listening skills, you can easily test that by choosing your favorite online video platform, watch any English movie first with English subtitle, and then turn it off to see if you can get a good grasp of what’s happening in the scene. In writing, you just need to write a lot (e.g., try writing a personal diary). Finally, on speaking, you have Bangkit as the perfect opportunity to interact with other students and instructors in English simply by asking questions in class and being active in the discussions. Don’t be afraid to ask questions. One simple tip is that you can write the script of what you want to ask so that you can be confident in saying that out loud in class.”

Contributing to Bangkit makes William’s work much more meaningful. He believes that we should always lift each other up and be helpful to those around us.
“I’d like to close with a simple analogy. Why does a river thrive with living organisms, whereas the Dead Sea is absent from any life? It’s because a river does not keep things to itself; it shares that downstream and enables plants and animals to benefit from it. The Dead Sea keeps things to itself; it accumulates things but does not share them with others, so nothing can live in it. Be like the river and not like the Dead Sea: Share what you know and give back to the community you’re living in; that way, not only you can grow but people around you, and you will eventually make a greater impact that way; to the society.”
So William highly recommends the tech experts and educators contribute to Bangkit. Their dedication can bridge the gap between education obtained on campus and industrial needs. In addition, taking part in Bangkit means being involved in advancing Indonesia’s tech talents for the future of our beloved country, Indonesia.
More stories about Bangkit contributors:
bangkit contributor google