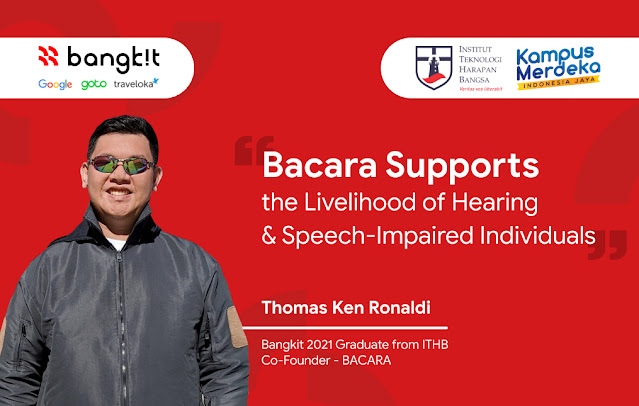 The number of speech-impaired in Indonesia is 6.9 million people, while the number of hearing-impaired is 19 million.
(Ministry of Social Affairs of the Republic of Indonesia, 2019)

Like most other humans, the speech-impaired (Teman Bisu) and hearing-impaired (Teman Tuli) also need to communicate with others. Articulating their intention is part of the communication process. However, what they want to say can only be conveyed through sign language.

Therefore, with his peers, Thomas Ken Ronaldi (22) decided to create an app to help Teman Bisu and Teman Tuli articulate their intent named Bacara. As a result, Bacara managed to get into the Top 15 Capstone Projects in Bangkit 2021.

Bangkit: Not a Haphazard Program

Ken―that’s what he is called―is a regular Electronics and Communications Engineering student from Institut Teknologi Harapan Bangsa (ITHB). He has been interested in IT since he was in high school. His passion for IT strengthened when he was in college, and he learned about Machine Learning (ML) in the 5th semester. Getting familiar with the basics of ML encouraged Ken to think that this technology can be beneficial for many people. Therefore, he was planning to develop it one day.

Not long after that, Ken heard an announcement about Bangkit 2021 on campus. One of Ken’s friends who became his teammate at Bacara later, Timotius Haniel (Timmy), asked him to participate in this Google educational program. Timmy knew that Ken wanted to deepen ML. So, Bangkit was the right path for Ken.

In addition, one of Ken's lecturers participated in Bangkit 2020 too. He is Bapak Maclaurin Hutagalung, BE, M.Sc, Ph.D., who then encouraged Ken to sign himself up for Bangkit because this program serves comprehensive learning material.

“Seeing that Bangkit is initiated by Google and supported by leading tech industries such as GoTo and Traveloka, I concluded that Bangkit will deliver well-structured and weighty teachings about tech.”

Then, Ken registered himself to Bangkit. His participation in this program was the beginning of Bacara’s founding story.

Found the Imbalance between the Number of Impaired Persons and Interpreters

As a cohort, Ken acquired many things from Bangkit. The most important one was the self-paced learning process. It was the first time Ken applied a self-study method. This process pushed Ken to be disciplined and manage his time well. Therefore, Ken’s Bangkit activities could go hand in hand with his lecture schedule. Ken was very proud when he made it through this self-paced learning period.

After gaining sufficient knowledge through ILT sessions in Bangkit, the time for Ken to implement his learnings came. He needed to team up with other cohorts to work on a capstone project. Shortly after, Ken collaborated with Timmy and four different cohorts from the ML, Mobile Development (MD), and Cloud Computing (CC) paths.

Before Ken’s team gave birth to Bacara, they held several brainstorming sessions. Moreover, these sessions could last up to 8 hours.

While the brainstorming period was still going on, one of Bacara's members came across the results of a developer academy. This academy created an application that helps the sight-impaired. Furthermore, it inspired the Bacara team to develop a similar application.

Knowing that an app for sight-impaired has been created a lot, the Bacara team decided to build an app for humans with other disabilities. In addition, they got information from their acquaintance who works as a sign language interpreter that the number of this profession is still minimal. This creates problems for Teman Bisu and Teman Tuli.

For that reason, Ken and his fellow cohorts were determined to invent Bacara, an app for Teman Bisu and Teman Tuli. They hoped that Bacara could overcome the imbalance between the number of impaired persons and interpreters. 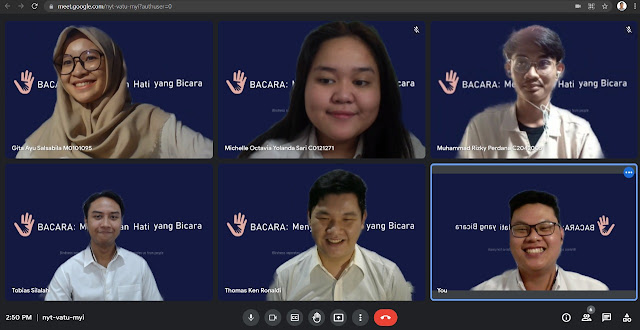 After going through various dynamics of the capstone project they were working on, Ken’s team managed to build Bacara. This application can translate the sign language into text and voice. The existence of Bacara is expected to help Teman Bisu and Teman Tuli articulate their intent.
Even though the Bacara team had faced problems with API requests before, they successfully got into the Top 15 Bangkit 2021 Capstone Project. It made Ken’s team deserve the incubation funds from Google and Kedaireka. This achievement gave Teman Bisu, Teman Tuli, and sign language interpreters fresh air.

Currently, Bacara is still growing and already has a bigger team. They involved a marketing and designer team in developing Bacara’s social media profile. In addition, they get advice and development assistance from experienced seniors at ITHB. Bacara will also hire UX Researcher, as they need direct feedback from Teman Bisu and Teman Tuli.

“We want to make Bacara a social project and a non-profit organization. Can’t wait to release our app on Playstore and make a huge impact for Teman Bisu and Teman Tuli.”

“Solving Small Problems Can Have a Big Impact”

As the co-founder of a team that made it into the top 15, Ken would like to give a message to the Bangkit cohorts about their capstone project.

“Please be aware of small problems occurring in your surroundings. Is there any problem that you can address using technology? Solve that problem in the capstone project you are working on. Sometimes solving small problems can have a big impact.”

In addition, Ken wanted the Bangkit 2022 cohorts to focus on product development strategies. He assured that the cohorts shouldn’t be afraid of the panelists because the panelists just want to see the cohorts’ earnestness in solving problems using the technology they created.

Not to forget, Ken advised the cohorts to study hard in Bangkit. Because for him, Bangkit provided a life-changing experience. Moreover, students’ participation in Bangkit will pride the campus and alma mater because they participate in a prestigious career readiness program.
More stories about Bangkit alumni & cohort:
bangkit google machine learning