Tomi’s Struggle against Life Hardships & Limitations: Anything is Possible 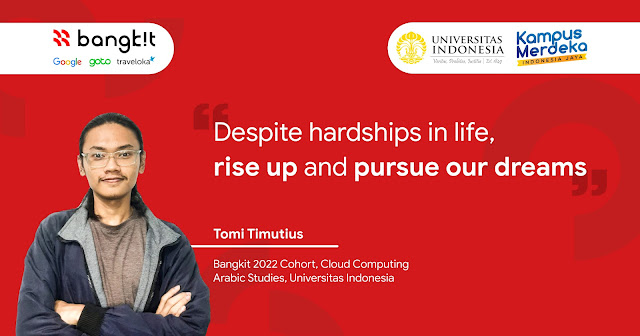 A Story of Tomi Timutius, Bangkit 2022 Student from Arabic Studies, Universitas Indonesia
Failing to achieve a dream is certainly painful for everyone, especially if we've wanted it for a long time. Tomi Timutius (21) felt the same way. He once dreamed of studying IT at a vocational school so that he could immediately work to help his parents. However, he failed a test that apparently declared him as a partial color-blind.

Feeling devastated, Tomi had to swallow the fact that his limitations have prevented him to achieve IT dream.

The First Member of Family who Went to University

Born in a very simple family, Tomi is the first one who studies at university. His loving mother didn’t finish primary school while his father is a daily laborer who never gets the chance to go to school. His older sister is a graduate of a vocational school and works as a receptionist at a restaurant.

Despite hardship and challenging economic situations, Tomi’s family strongly encourages and supports Tomi to continue his higher education. At first, Tomi wanted to study at a vocational school like his sister did, so he could work immediately after graduating. He also had a dream to learn multimedia there. Unfortunately, his partial color blindness made him bury his SMK dream and study at regular high school instead, taking social science as his major. 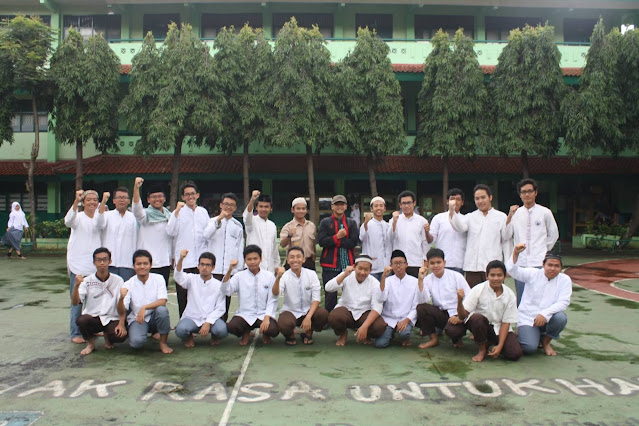 At school, Tomi was a member of the Islamic student community with an interest in learning Arabic. At home he enjoys his peaceful time alone reciting the holy Quran. No wonder Tomi was so motivated to choose Arabic studies at Indonesia’s top university, Universitas Indonesia. Although his parents couldn’t pay for his tuition fee, Tomi wasn’t discouraged. His perseverance and his parents’ prayers lead him to get a full government scholarship for his study.

While taking his Arabic studies at Universitas Indonesia, Tomi started to relive his IT dream by learning basic level programming through YouTube channels. Not long after that, the pandemic hit.

A Desire to Help the Family's Economy 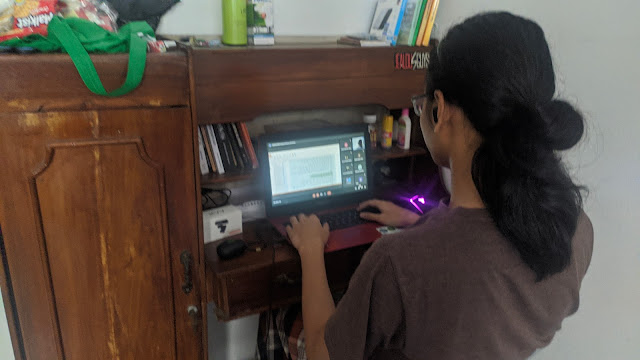 When Tomi's second semester of study began, the coronavirus outbreak began. Spending almost his entire time at home made Tomi realize how his father and sister have been working extra hard to earn a basic living.
Tomi was thinking hard about how he could help his family’s situation in the long term. Upskilling in IT, his dream since a while ago, seems to be the right answer. At that time at the end of 2021, Tomi saw his friends participating in MBKM run by the Ministry of Education, Culture, Research, and Technology.

“I realized that I have to take part in an edu tech program that can improve my skills and experience, so I can be more prepared for an internship. Then, I met Bangkit, which was initiated by Google. I believe Bangkit can improve the quality of my CV.”

Tomi also felt that the Bangkit curriculum is very structured, different from when Tomi self-taught himself through Youtube. The stages of learning in Bangkit are clear. In addition, Bangkit also cooperates with leading tech companies like GoTo and Traveloka which can support Tomi’s career in the future.

Then Tomi decided to register himself in Bangkit. Even though he came from a language major, which is clearly a non-IT major, his lecturers fully supported him. After passing the math and Cloud-Computing specific selection test, Tomi was finally accepted in Bangkit, in the learning path that prepares him to be Associate Cloud Engineer certified.

Coming from a Non-IT Background isn’t a Limitation

After getting the opportunity to learn CC in Bangkit, Tomi has a vision in terms of implementing his knowledge.

“One day, I want to create an app and website that can help people learn Arabic. I knew that learning Arabic is not an easy matter. Therefore, I want to invent something that would make it easier for people with no basic Arabic to learn this Middle-Eastern language.”

As a language student, it was hard for Tomi at the beginning to learn in Bangkit. But to get more understanding of the material being taught, Tomi adds more insights from various sources. As a result, Tomi can keep up with the learning pace of Bangkit.

“For my Bangkit fellows who come from non-IT backgrounds, I know it’s not easy for us to begin our journey here. But coming from a non-IT major isn’t a limitation. You have to keep your spirits high and never quit. We need to prove that non-IT students can also excel in the IT field.”

After studying for a month in Bangkit, Tomi has acquired various skills. Now, he can build a website. Tomi is also looking forward to the Bangkit Career Fair, which he believes that this event can help him start a career in IT as an intern in the future.

Tomi is a perfect example that shows us even in the midst of limitations, we can always rise up. He teaches us that in the most challenging situations, we should be brave to pursue our dreams.
More stories about Bangkit alumni & cohort:
bangkit cloud computing google