From Failed Dream to Progress: Learning Android Development in Bangkit 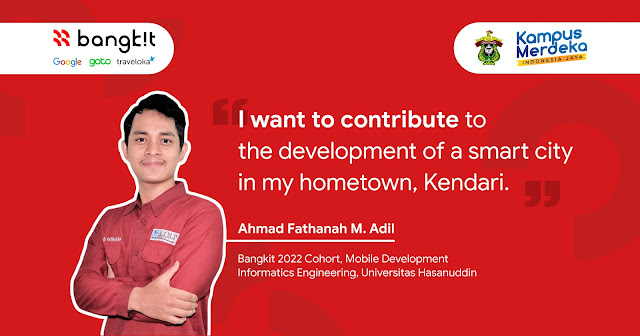 “As many as 87% of Indonesian students feel they are in the wrong major.”

(Irene Guntur, Educational Psychologist at Integrity Development Flexibility, 2021)
Kendari-born Ahmad Fathanah M. Adil (21) felt the same way. Behind his current role as a student of Informatics Engineering, Universitas Hasanuddin, he once actually dreamed of being a soldier. Unfortunately, Ahmad failed two times due to age reasons. Due to this failure, Ahmad followed his parents’ recommendation to study IT at the best public university in Sulawesi.

Actually becoming a programmer was not something that Ahmad had ever planned before. He had no idea what the future of an IT expert would look like and he was nervous about everything he would learn. Even Ahmad felt that he was in the wrong place. At that time, he never thought that one day, he would learn to be an Android developer. 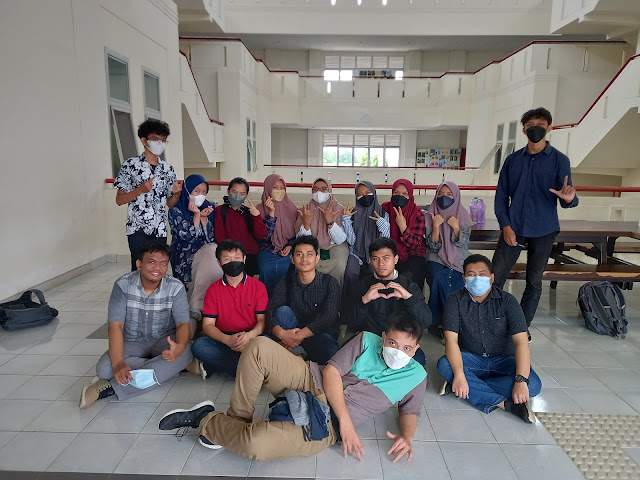 When Ahmad faced difficulties in studying on campus, he felt that he couldn’t do anything. His friends' progress was far away, while Ahmad was still walking in the same place. One of the reasons might be because of his long-lost dream of becoming a soldier.
The culmination of Ahmad’s desperation was at the end of his first semester. He had to build a “hangman,” a guessing game for his final semester assignment. However, Ahmad decided not to complete this task, because it was beyond his capacity. He really couldn’t do it.

When the semester break was coming, unlike his friends who went on vacation, Ahmad spent his time contemplating. He did introspection and questioned himself about his slow learning progress. Finally, Ahmad decided to spend his semester break in an unusual way.

“I spent my semester break by learning programming myself from zero through YouTube. As a result, I became addicted and felt like unlocking new skills. I also managed to create the ‘hangman’, which was originally my final semester project. My perseverance in studying during the holidays made me understand the material that my friends would learn in semester 2.”

Addicted to learning programming, Ahmad had a new habit. During each semester break, he always spent more time doing self-taught learning. He who used to be left behind then became an outperforming student. When Ahmad failed military academy selection for the second time, he was no longer disappointed. Instead, he convinced his parents that he really wanted to be a developer.

Keep Himself Leveled Up 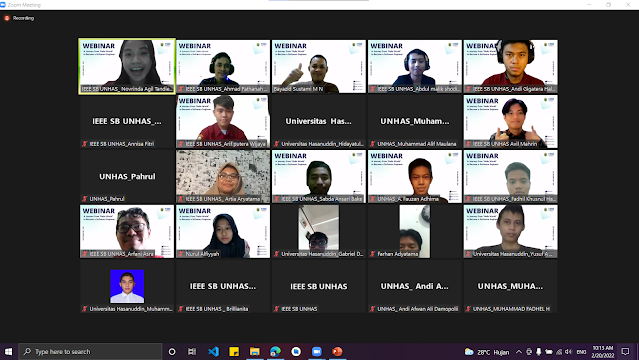 Ahmad’s persistence in learning was performed as his “revenge” after being a lagging-behind student in the first semester. As time went by, Ahmad developed his “hangman” from the terminal version to the Android app version.
Feeling dissatisfied with his achievement, Ahmad also expanded the scope of his studies. At first, Ahmad only struggled with the development of his “hangman” game. Increasingly, Ahmad decided to make various apps and also clone well-known apps.

“I created these apps because I always want to level up.”

The first application besides “hangman” that he created was a money management app. After that, Ahmad built more various applications such as a news app, an Instagram clone named Kawegram, and a clone app for Whatsapp. In addition, Ahmad also created a geo educational tourism app for the province of Central Java. 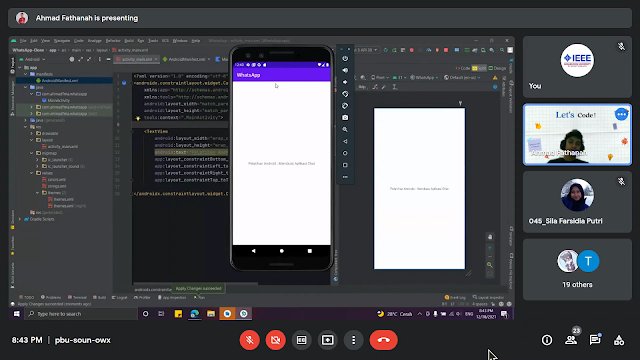 This geo educational tourism app was created when Ahmad collaborated with his peers from the Geological Engineering department on campus. They teamed up and participated in a competition that assigned them to develop the geological side of Central Java Province. In this competition, Ahmad and his team won third place.

Besides winning the competition, Ahmad became known to his senior who gave him the opportunity to work as a Part-Time Mobile Developer at the Khalifa Institute Makassar. The company where Ahmad developed himself is an educational company that guides students in university admission tests. Here, Ahmad is in charge of developing applications that are not only compatible with Android, but also iOS.

Ahmad’s desire to keep making good work brought him together with Bangkit. Feeling thirsty for knowledge, Ahmad saw Bangkit as a golden opportunity, because this educational program has a learning path that he was aiming for, Mobile Development (Android). 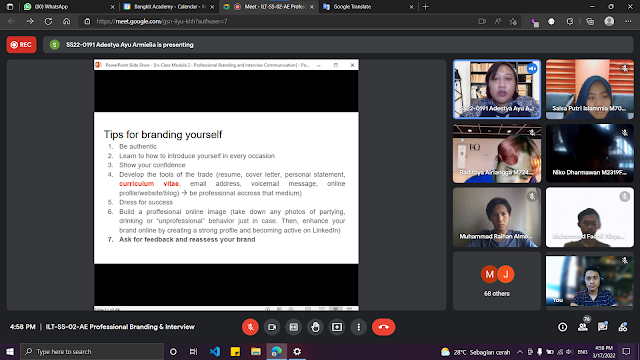 Seeing that participation in Bangkit was apparently free, Ahmad became more interested in registering. He feels that everything he needed was provided by Bangkit as he was accepted as a cohort. This Android enthusiast was also very tempted by the free Associate Android Developer (AAD) certification exam opportunity offered by Bangkit.

“It’s interesting seeing soft skills classes in Bangkit. Knowledge about personal branding, time management, and English is something that I need the most as someone who wants to be a future developer. For me, soft skills are as important as tech skills.”

In addition, Bangkit also provided a fun learning experience for Ahmad. He also felt that his peers are nice to chat with. In terms of learning material, Ahmad assessed that Dicoding provided completed insight. He, who is used to self-taught, admitted that he often misses the details he needs to know. However, the learning material provided by Dicoding was very complete and structured.

Ahmad’s interesting study experience happened during his English class in which he was obliged to group with his peers. Unfortunately, at the next meeting, his friends were not there. Feeling confused, Ahmad couldn't help but team up with his instructor. He admitted that it was challenging for him because his English instructor was a Filipino. So, Ahmad could only communicate with his instructor in English. That was the first time Ahmad talked fully in English. Therefore, Ahmad felt that Bangkit really pushed him out of his comfort zone. 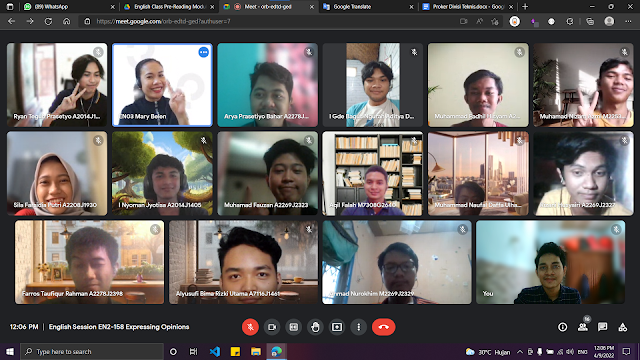 Ahmad's aspiration is very unanimous to become an Android Developer. To achieve this goal, he always spends his time every day studying in Bangkit. No matter how busy he is, at least, he allocates his time for 2 hours.
After graduating from Bangkit later, Ahmad aspires to become a certified Associate Android Developer. Moreover, he wants to take part in Bangkit Career Fair and be hired by Bangkit industry partners such as GoTo. However, Ahmad has bigger dreams.

“One day, if Kendari wants to carry the smart city concept, I want to contribute to the city of my birth.”

For his Bangkit fellows, Ahmad wants to spread his spirit. His peers need to know that Ahmad starts his remarkable learning journey not from zero, but from minus. Everything that Ahmad had been through was a process that needs persistence. So, Ahmad convinces his Bangkit fellow that everyone can make great achievements, even if we start from the bottom.
More stories about Bangkit alumni & cohort:
bangkit google mobile development