“The number of disabled in Indonesia reaches 22.5 million people.”
(Central Bureau of Statistics in Indonesia, 2020)

From the data presented above, we can conclude that approximately eight percent of Indonesians have disabilities. There are also findings that some of these persons have multiple impairments. However, having limitations in their daily activities shouldn’t hinder them from living a decent life as most people do.

A group of students participating in Bangkit 2022 thought so. Being in a group named “TeDi,” these individuals believe that the disabled deserve a better life. So, equipped with sufficient knowledge after spending 900 hours of study in Bangkit, they created an app with the same name as their group. Who would have thought that this all-in-one accessibility app managed to get into the Top 15 Product-Based Capstone Projects and earn IDR 140 million in incubation funds from Google and DRTPM Dikti? 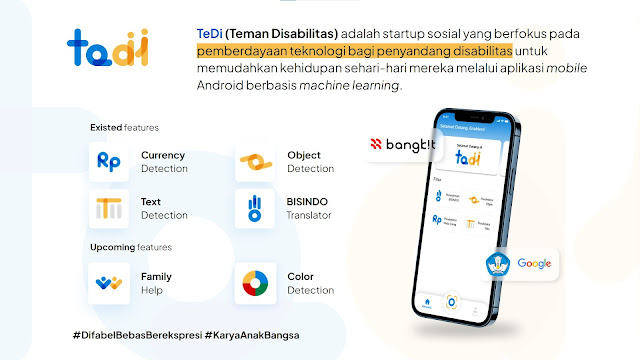 TeDi is an all-in-one accessibility app that aims to help people with disabilities do their daily activities. TeDi stands for “Teman Disabilitas,” which means “disabled’s friend.” According to their name, TeDi’s team hopes their creation can be a reliable buddy for its users.
This app has some excellent features: Object, Text, Currency Detection, and BISINDO Translator, which can translate Indonesian sign language. The team wants to embrace all people with impairments. However, TeDi’s team still focuses on people with sight, hearing, and speaking impairments.

One of the things that inspired this team to create TeDi was the participation of people with impairments in Bangkit 2021, and Fayyadh Aunilbarr was one of them.

“We were amazed by Kak Fayyadh’s passion for learning and thought that technology should make the life of people like Kak Fayyadh easier,” Gilang Martadinata, TeDi’s Product Manager, said.

In addition, TeDi also wants to support the government in raising the issue of the disabled’s equality. At the last G20 event, the Indonesian government put this topic forward, and TeDi desires to amplify it by creating this accessibility app.

Supported by Industries and Universities 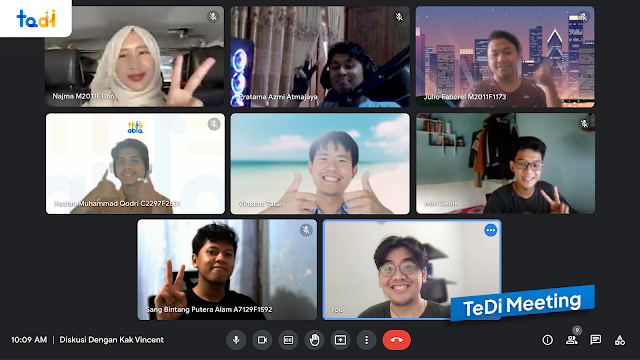 Bangkit, as the training ground for TeDi’s team, played an essential role in forging them to create this accessibility app. Each team member was equipped with comprehensive technical knowledge from basic to advanced for 900 hours in each learning path. Besides acquiring technical insights, TeDi’s team also received soft skills and English training. They admitted these non-technical skills helped them cooperate in inventing TeDi.

“The communication and English learning material for business helped us harmonize our work on TeDi. We feel lucky to get this insight for free from Bangkit. However, if we have to learn about this on another platform, the price must be costly,” Najma, TeDi’s Leader, said.

Besides the comprehensive course, TeDi is grateful for the full support of Bangkit partner industry and university. From the industrial sector, TeDi was mentored by Vincent Tatan, Senior Machine Learning Engineer at Google, United States. Marthin Satrya Pasaribu, iOS Engineer at GoTo Financial, also became TeDi’s mentor. This team realizes this is an opportunity they can rarely get from other educational programs.

Then from the university side, Universitas Padjadjaran, the incubator university, has been helping TeDi since the team was formed. In addition, Ibu Dr. Anindya Apriliyanti Pravitasari, M.Si., as the lecturer, is also willing to guide the group outside the mandatory meeting hours. It showed that Universitas Padjadjaran is very open to this program.

An Invention that Makes Heart Full 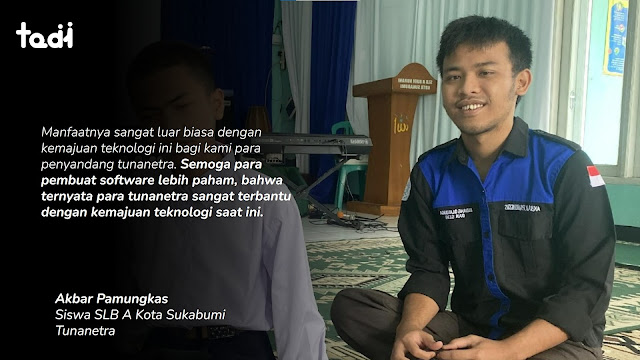 In creating TeDi, this team encountered challenges. All team members reside in different cities. However, their distance doesn’t prevent them from giving their best. They have produced a well-functioning app and built an invention that makes their hearts full.

“We were happy seeing the prototype of TeDi was tried by some people with sight impairments. When the app successfully detected a flower, our user said that they wanted TeDi to launch as soon as possible. In addition, we also felt our hearts are full, when we saw TeDi could help our user with partial blindness read a novel using text detection feature. Our user really loves reading novel and she has limited access to braille books,” Gilang said.

Seeing that TeDi can help people with disabilities, TeDi reaped compliments from the government. Bapak Ridwan Kamil as the Governor of Jawa Barat, Bapak Anies Baswedan as the Governor of DKI Jakarta, and Bapak Dony Ahmad Munir as the Regent of Sumedang are proud of TeDi’s commitment to helping the disabled’s accessibility.

“We hope that innovations built by TeDi can inspire youths to create the same beneficial breakthroughs,” Bapak Ridwan Kamil said on one occasion to TeDi. 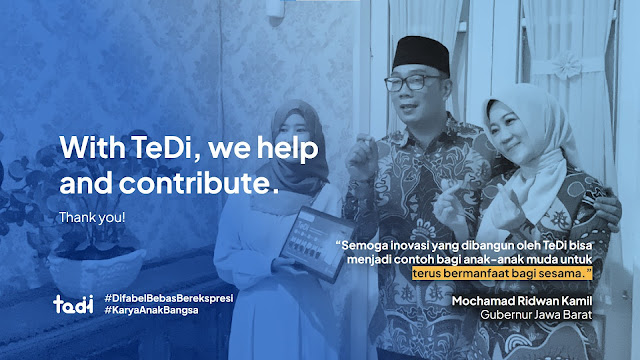 TeDi believes that Indonesian youth can create impactful products as they did. Therefore, they want to share some critical points for students interested in joining Bangkit 2023 and aspire to produce an impactful app successfully.

“First, be relevant to the present, so that your team can find problems that are currently happening and need to be solved. Second, remember that all ideas are bad at first. What makes it good is its execution. Third, don’t hesitate to reach out to your mentors. If you encounter some issues in the field, ask for your mentor’s opinion as soon as possible to make it solved.”

Gaining a lot of benefits from Bangkit makes TeDi strongly encourage you to participate in Bangkit 2023. This team said that Bangkit gave them life-changing experiences. In their opinion, Bangkit not only offered them an opportunity to be known and seen but also a way to be a beneficial human being for many.

Grab your chance to create innovative breakthroughs as TeDi did by signing up for Bangkit 2023 here!
More stories about Bangkit alumni & cohort: