“Match your behavior with your goals”

“Take a minute: Look at your goals, look at your performance, see if your behavior matches your goals.”
(Kenneth H. Blanchard, American Author)

Ensuring her behavior is in line with her goals is something Siti Fatimah (23) has always done. For her, nothing can stop her from achieving her dream of becoming a tech talent, including her family’s difficult economic situation. Carrying the hopes of her single strong mother, Fatimah always strives to give her best in everything she does. Her matched habit with her goals finally led her to become an Android Developer in a company in Jakarta.

A Better Future that Fatimah’s Mother Wished for 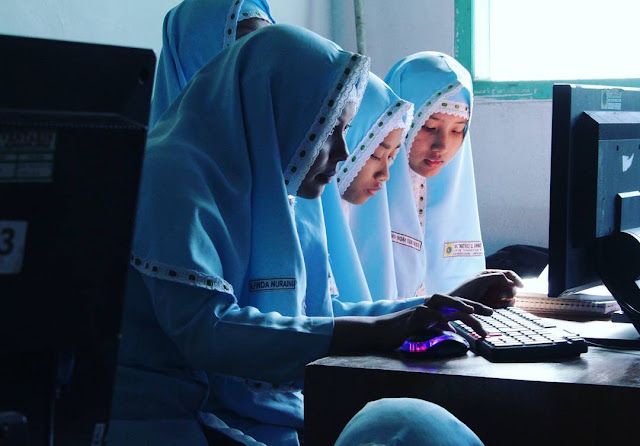 Fatimah is the only daughter of a shoe factory laborer who lives in Lamongan. Her mother was the family’s breadwinner and paid for daily needs and Fatimah’s education. Having a working mother made Fatimah spend most of her time only with her grandmother.
Even though Fatimah’s mother had to be the only financial source of the family, she always wanted to give the best to her daughter. So, when Fatimah, who went to middle school then, began to show interest in computers, her mother didn’t hesitate to buy her a laptop.

“Nothing more important than seeing you have a better future and not working in a factory like I am now,” Fatimah’s mother said. Her words are entrenched in Fatimah’s memory.

Her mother’s sacrifice made Fatimah determined to pursue her dream of becoming a future tech talent. To get closer to her goal, Fatimah went to an Islamic school named Madrasah Aliyah (MA) Matholi’ul Anwar. This Islamic school is exceptional because they vigorously train its students to become digital talents.

In providing Information Communications Technology (ICT) subject matter to the students, Fatimah’s school cooperates with Institut Teknologi Sepuluh Nopember, Surabaya. In most schools, students usually get an ICT subject once a week. However, MA Matholi’ul Anwar’s students can meet this subject five times weekly. Nothing made Fatimah more enthusiastic than becoming a student at that school.

Fatimah as the Bright Student on Campus 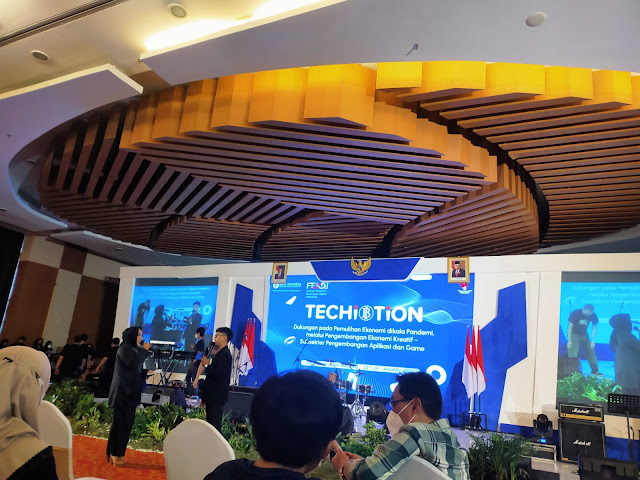 Always wanting to match her behavior with her goals, Fatimah planned to attend university and take an Informatics Engineering major. At that time, Fatimah chose to apply to Universitas Negeri Malang. Her achievements in scientific writing competitions helped her to be accepted into this university. Finally, Fatimah migrated from Lamongan to Malang as her first year began.
While studying there, Fatimah became various scholarship awardees, from a University Scholarship to a scholarship from Bank Indonesia. It helped her mother in paying for her higher education. This aid encouraged Fatimah to always give her best in studying.

To maintain her academic achievement, Fatimah spent a lot of time studying various tech subjects outside the classroom, starting from Front-End to Data Science. Unfortunately, all the learning materials she engulfed confused her about which study concentration she should pick. Finally, after long consideration, she decided to deepen her knowledge about mobile development.

After choosing to learn more about mobile development, Fatimah sought learning opportunities outside the classroom that could accommodate her curiosity. Her search led to Bangkit, which was about to start its pilot program in 2020. Seeing that Bangkit only had one learning path then, Fatimah decided only to become a follower of Bangkit news.
After Bangkit 2020, this program was back for 2021 as part of the Kampus Merdeka Program. Fatimah wanted to sign up, but her schedule discouraged her. Finally, she chose to wait for one more year. When Bangkit was present for 2022, Fatimah didn’t think twice about joining.

In Bangkit 2022, Fatimah went for Mobile Development (Android) path because she had been waiting for it for a long time. Finally, Fatimah was accepted into Bangkit, and the time for her to prove herself in this program had come.

As she began to study in Bangkit, she faced some challenges. The biggest one was the busy study schedule. However, Fatimah thought it was worth what she got, like comprehensive learning, a helpful facilitator, and ILT sessions.

“For me, Bangkit is more than just the right path towards my dream. This program really meant it in educating students to become excellent developers in the future.”

As Fatimah said, she was then born to be a developer who was ready to kickstart her career once she graduated from Bangkit and college. So she was all set to compete in the Grow with Google (GwG) Career Fair.

“Your behavior and your goals should be in line.” 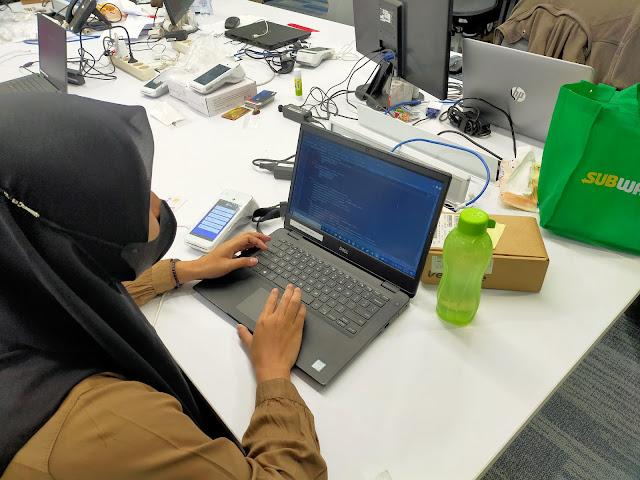 After graduating from Bangkit, Fatimah felt she had gained many like professional networking, best practices from experts, and the opportunity to participate in the GwG Career Fair. At the GwG Career Fair, Fatimah began to show her good qualities as Bangkit 2022 graduate. As a result, she applied for all Android jobs there.

“After passing a series of tests, I was finally accepted as an Android Developer at PT Prima Vista Solusi. In the office, I am in charge of developing Android applications for EDC machine and working on the QR payment method project.”

The supplies that Fatimah got from Bangkit, especially in terms of soft skills, really helped her in her career. In addition, teachings on time management, adaptability, and hands-on experience working on a capstone project contributed to Fatimah’s preparedness before taking the plunge into the professional world.

Wishing many female digital talents to achieve their dreams as she did successfully, Fatimah gave some takeaways.

“There are two things I want to emphasize to my female friends who aspire to be tech talents. First, never waste an opportunity because it usually doesn't come twice. Second, always match your behavior to the goals you want to achieve. Every time you plan to do something, just make sure that what you are doing is in line with the goals you are pursuing.”

So, for you, Indonesian students who want to be ready-to-work tech talent like Fatimah, she strongly recommends you to participate in Bangkit 2023. Your involvement in this program can help you achieve your goals, and Fatimah has proven it.
More stories about Bangkit alumni & cohort:
android developer bangkit google