“Your passion needs your 100% energy” 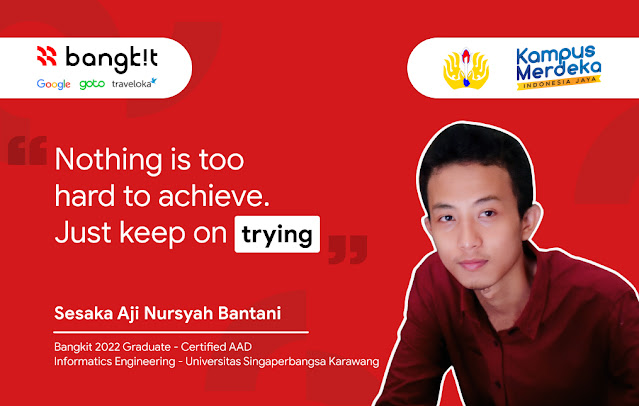 A Story of Sesaka Aji Nursyah Bantani, Bangkit 2022 Graduate from Informatics Engineering, Universitas Singaperbangsa Karawang
Everyone has their definition of living well. But, for Sesaka Aji Nursyah Bantani (21), his life is more than enough because of his parents’ love. In fact, his life is abundant. Although Saka―that’s what he’s called―had economic difficulties, he never felt deprived, thanks to the outpouring of his parents’ prayers and efforts to support and take care of him.
Together with his two siblings, Saka grew up in a small 36 m2 warung (kiosk) in Kabupaten Pandeglang, Banten. The food stalls of Saka’s parents played essential roles in sending Saka to college and helping him achieve a global-scale Android certification. Through the ups and downs in pursuing his dreams, this is the story of Saka’s learning journey in Bangkit.

Saka was born to an exceptional couple who live simply in a small kiosk that sells cigarettes and comfort foods on Jalan AMD Lintas Timur, Kabupaten Pandeglang, Banten. His mother is a primary school graduate, while his father is a high school graduate. Despite living modestly, Saka’s parents always try to give their best for their three children, especially in education. Therefore, parental love is always abundant in Saka’s life. 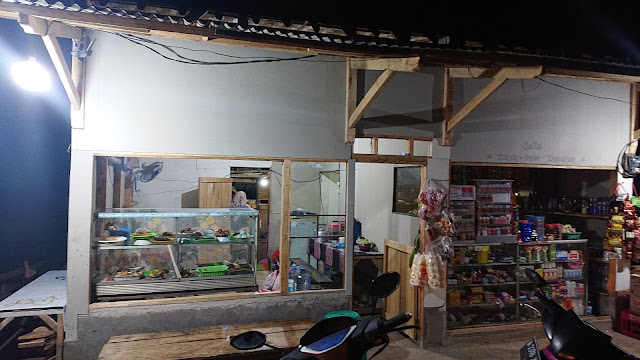 The neighborhood of his parent’s small kiosk is where Saka grew up. Since childhood, Saka has been reading. When he went to middle school, Saka began to be intrigued by Information Technology (IT) because of the school’s Information, Communication, and Technology (ICT) subject. Unfortunately, Saka’s little pocket money prevented him from going to the internet cafe to learn about computers. The only computer he could use was in his school lab.

Being interested in IT since middle school, Saka decided to attend a vocational school. So he became a student at SMKN 1 Pandeglang, majoring in Software Engineering. But then, Saka didn’t have a laptop. So his parents worked hard to raise money to give their second son a computer.

Saka’s mother cooked and stayed at the kiosk from dawn to dusk. Then from evening to morning, Saka’s father would replace his mother in waiting at the booth. Finally, the hard work of Saka’s parents could give him a laptop with minimal specifications.

Finally, having the laptop of his dream, Saka felt contented. But unfortunately, that joy only lasted until he went to the eleventh grade. At that time, Saka “met” Android and realized that his laptop wasn’t powerful enough to run Android development software.

Dicoding that Bridged Saka with Android

When Saka was in the eleventh grade, he started to learn about Android. Regrettably, Saka’s laptop wasn’t compatible with Android development software. Therefore, Saka saved his pocket money to upgrade his old notebook one day.

“I also earned extra money by repairing and helping people install software on their laptops. In addition, I became a lab assistant at school. Alhamdulillah, I could collect my income and use it to upgrade my old laptop to a new one, which can run Android Studio.”

As Saka started getting acquainted with Android, he became more interested in exploring this operating system. Usually, Saka spent time studying in the afternoon at school before finally going home and fulfilling his duty at his parents’ kiosk. However, Saka’s persistence in studying got him the highest point on a final Android project at school. He successfully created a smart home app using Arduino and an Android app.

Saka’s absorption of Android continued until he graduated from vocational school and wanted to deepen his knowledge of this. His passion encouraged him to aspire to be a Mobile Developer to provide a better life for his family. Shortly after he made up that determination, he met Dicoding through a free program that offered Android learning opportunities for beginners.

Not wanting to waste that free learning opportunity, Saka studied at Dicoding. He felt comfortable going through the learning process and even collected his money to subscribe to the paid classes once the free program was over. Another reason why Saka was eager to learn Android at Dicoding was that he wanted to be a Google-certified Associate Android Developer. This willpower led Saka to find Bangkit in the middle of his learning journey.

Bangkit Prepared Saka to be a Global Certified Tech Talent

Participating in many of Dicoding’s learning programs guided Saka to find Bangkit. He saw that Bangkit is a career readiness program initiated by Google and supported by GoTo and Traveloka. However, in Saka’s eyes, the most intriguing part of Bangkit is the Google AAD certification offered after the program.

As we already know, AAD certification was something that Saka wished to achieve because he wanted to be a digital talent with global competitiveness who could provide a prosperous life for his family. Therefore, he didn’t think twice about applying for this program because Bangkit had a Mobile Development (Android) learning path, offered Google AAD certification, and could equip Saka with English and soft skills.
After being accepted into Bangkit, Saka experienced that his gains from Bangkit exceeded his expectations. Bangkit prepared him to be a high-caliber digital talent. In addition, Saka also had an opportunity to imply his learning in the capstone project. He created an app with his teammates to help people distinguish between fresh and spoiled fruit.

“Bangkit really prepared me to be a digital talent with global competitiveness. After graduating from this program, I not only became more confident because of the technology, soft skills, and English training that I got, but also successfully passed the Google Associate Android Developer certification exam.”

Give Your 100% Energy to Your Passion 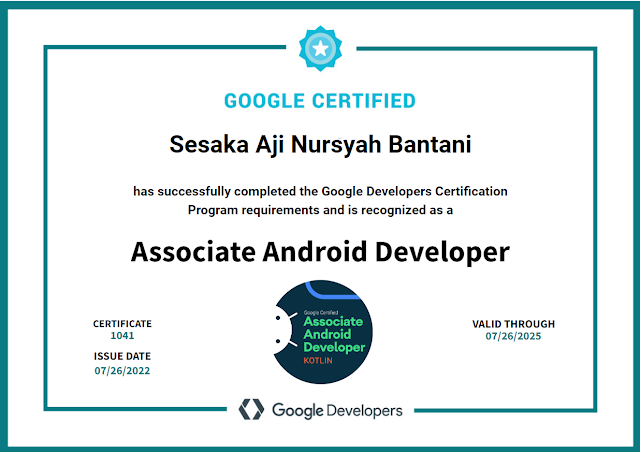 Besides managing to earn AAD certification after Bangkit, Saka was also hired by Dicoding as an External Code Reviewer. He is proud to contribute to where he first learned about Android. The 900 learning hours in Bangkit made Saka ready to launch a career.

“I think, apart from the prayers and love of my parents, the key to success is my earnestness in carrying out my passion. I always put 100% of my energy into doing the things I love. It was this determination that brought me one step closer to my goals.”

Saka really thanks his parents for what he has achieved now. From a small kiosk where his family made a living, Saka grew and began to fulfill his dreams one by one.

To his friends who plan to join Bangkit 2023, Saka wants to convince them to cultivate patience continually through every learning process.

“No matter how difficult your goal to be achieved, it will always be within reach if you are willing to persevere and keep trying.”